You are here: Home / Istraživanja i Analize / Research: Judicial Culture and the Role of Judges in Developing the Law in Serbia – Conclusions and Recommendation 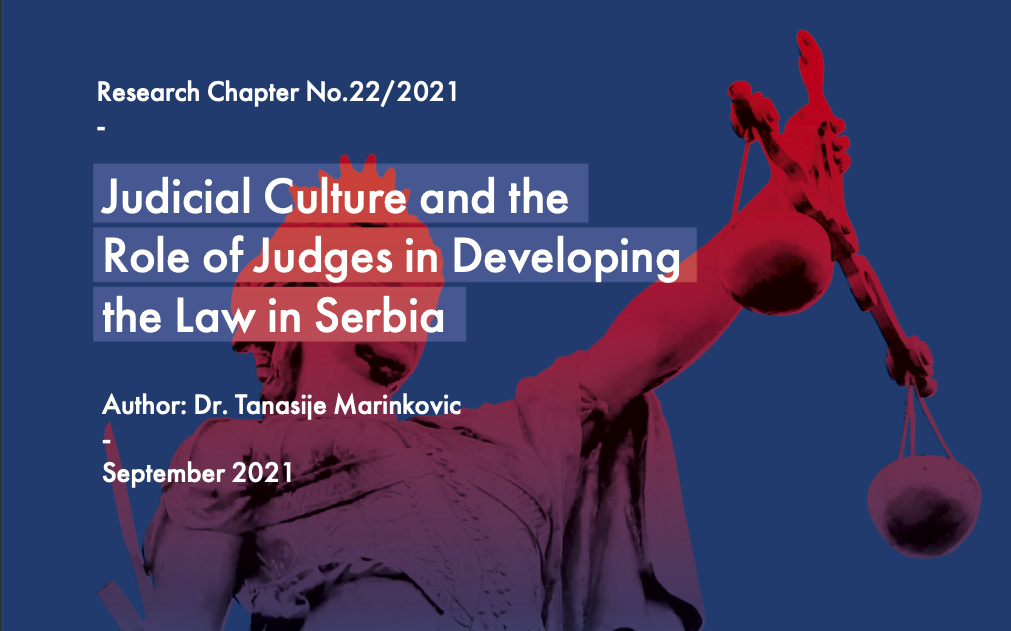 Other partners in the project are T.M.C. Asser Instituut from the Netherlands, Albanian Legal and Regional Initiative (ALTRI) and Centre for Judicial Research (CEPRIS).

The underlying objective of this project is to complement the European Commission’s process of vertical judicial Europeanization with an internal, horizontal initiative that would define the main features of the Western Balkan countries’ judicial culture and make recommendations for bringing it more in line with the judicial culture of the well established European democracies.

In that aim, professor at the University of Belgrade Faculty of Law Tanasije Marinkovic made Conclusions and Recommendations related to the judicial culture of Serbia.

Serbian judicial culture can be summarized as predominantly dogmatic and formalist, with a long-term perspective to evolve towards a more robust role of judiciary in developing the law.

Serbian judges generally prefer to adjudicate not on the basis of constitutional or legislative sources, but on the basis of by-laws which attempt to regulate social relations in very details. And, since such regulation is not always available, on many occasions, there is no proper reasoning in the rulings.

However, the problem of poorly reasoned judgments is not just the consequence of the tradition of textual exegesis and “one right answer approach”. It is also explained by the big case backlog and pressure for the respect of the right to trial within a reasonable time.

The other side of the coin of the predominantly dogmatic and formalist approach to adjudication is that judiciary in Serbia has not established itself as a third branch of government. Serbian judiciary generally does not perceive itself as a separate branch of power and it does not always act like one, as manifested by the practice of poorly reasoned judgments and incoherent case-law. It is underopen pressure from the executive and legislative branches of government, especially in politically sensitive cases.

Furthermore, their prominent members have engaged, for the past couple of years, in the veritable populist attacks on the judiciary, with the intention to intimidate judges who do behave as an independent third branch of government, as well as all the others who could potentially follow suit.

Finally, the legal education does not equip future judges with values and heuristic tools necessary for the establishment of the judiciary as an effective third branch. It does not boost the image of a judge – lawmaker, but of a judge – simple mouth speaker of the law: the syllabi and teaching methods being more supportive of the authoritarian discourse rather than of the discursive authority.

The full text of the Recommendation can be found at the following link, while the Conclusions can be viewed here.

The research “Judicial Culture and the Role of Judges in the Development of Law in Serbia” in English you can be found HERE.